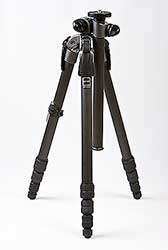 When we had to switch to new blog software we had to lose our old content, it was the price we had to pay to be able to blog again. Well we have review what was popular on the old blog and found that our review of the Gitzo Explorer GT2541EX was a very popular post. So rather that loose the post altogether we are going to repost it on our new blog software. First published in 2009.

So what is a Gitzo Explorer GT2541EX? The Explorer range has a number of features which make them ideal for macro field photography. Its design makes getting to small subjects, which very often manage to be located in inaccessible places, much easier. As you can see from the photographs, it looks like any conventional tripod. So what makes it different and a top performer in the field of macro photography? Let’s start with the legs. On a conventional tripod, the angles at which the legs can be set are governed either by a set of stops or a spreader which moves all three legs together. The Explorer however, is different. Each leg can be set at a different angle. To set the angle, you unlock the leg by lifting a leaver at the top of each leg. Once unlocked you are free to move each leg through its full 90 degrees of movement. Pushing the leavers down, locks the legs to the angle you have set.

This ability to move each leg independently, is one of the great advantages of this tripod.  Often you find your subject positioned with some sort of obstruction nearby. A large stone, a wooden log or whatever, I can guarantee it will always be in the way. Using a conventional tripod it becomes a problem trying to manoeuvre the legs around the obstruction. It can lead to some very, strange tripod arrangements, using beanbags and string. With the Explorer you can angle the legs either to miss the obstruction or even to if you’re lucky, rest on it.

The column of the Explorer has another unique feature. Upright it behaves like any normal centre column i.e. up and down. But where the Explorer is different is it has a second adjustment. Allowing the column to swing from the upright to the horizontal and beyond.

This unusual arrangement allows a range of movements outside the scope of more conventional tripods. You can get the camera very close to the ground or shoot vertically down on a subject or fly the camera into spaces that would  have a traditional tripod floundering. There will be more about using the tripod in the field, in part three of this series.

That about covers the special features of the tripod, in most other respects the Explorer is like any normal series two Gitzo tripod. Being of carbon fibre construction the Explorer weighs in at an easy to carry 1.84kg (4.1lbs). With its ability to carry 12kg (26.4 lbs) it copes easily with a modern DSLR (Digital Single Lens Reflex) camera body and lens. Our preliminary tests suggest that it will hold a 400mm lens steady as long as you are using a reasonable shutter speed. What we won’t be trusting to its care any really big glass. One thing worth mentioning is the G-lock system. Anyone who has used the old style Gitzo tripod will be aware of the intricacies of using the old leg locking system. But for more years than I care to remember, I have had to think carefully before lengthening or shortening the legs. If you loosened the wrong locking ring by mistake the resulting fight with the three-legged octopus was not pretty. It had had only one saving grace it was very robust.

Being the first Gitzo tripod I have used with the G-lock quarter turn lock system. I am now wondering why it ever took so long for Gitzo to get around to it. You can lengthen and shorten you legs without so much as a second thought. So if you have used a Gitzo tripod with the old locking system and that was one of the reasons you would never use one again, can I suggest that you go and try the new G-lock legs. You may be converted.